The Advance Design finite element analysis engine is evaluated in this study.

The Advance Design FEM (Finite Element Method) analysis engine is a powerful tool that allows users to study complex structures, by dividing them into mesh units, where for each of the deformations, efforts and stresses can be solved by using known equations of elasticity.

Considering different sized models (real projects from customers), a timing comparison of mesh operations and the FEM engine is made between:

Between the chosen Advance Design versions, differences in the analysis model may appear (especially regarding the number of loadings) due to revisions made in the windwalls rupture algorithm.

Note: Tests were realised on a desktop computer with the following configuration: Intel Core i5 3.2 GHz, 16 GB RAM, Win 7 x64

On larger models, notice the improvements with the meshing operation, as the necessary time for it was decreased by 86.2 %. Also, the total time necessary for running the FEA analysis has been reduced by 22.9%.

In conclusion, Advance Design has succeeded to manage large models with over 214 000 mesh nodes and over 1 285 000 degrees of freedom (DOF), and its possibilities are extended. 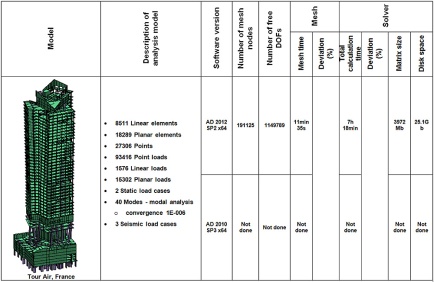 Are you ready for the Eurcodes? GRAITEC’s  Advance Design 2012 is!  The latest version includes all of the UK National Annexes for EC0, EC1 (climatic), EC2 (concrete), EC3 (steel) and EC5 (timber).

Many top UK engineering consultancies have already decided to move over from British Standards to the Eurocodes and Advance Design is making this transition very easy.A very intuitive and easy to use CAD interface takes the stress out of model creation and this is made even easier with intelligent BIM connections to many industry standard file types including IFC, SDNF, PSS, CIS2 and DXF.  Fast finite element analysis and design with automatic mesh generation and member optimisation allow for many different iterations of you model in quick succession.  Easy to create result reports and documentation in many formats including DOC, PDF and EXCEL. Advance Design is the complete package for Eurocode Design.

Advance Design provides the option to define a manual mesh on linear elements in order to save time both in modeling and computation.

Linear elements mesh: by selecting one or more linear elements and accessing the properties window, all the available options that can be modified are in the Mesh category.

i. Automatic – when this option is active, all the imposed/intersected structural elements will be connected and share common nodes.

ii. Number – by entering a value in this field, the element will be meshed in that number of elements, without considering the value of the general mesh (global mesh options).

iv. Spacing – this option is directly connected to Size and Secondary Size; when any of the other available options, besides uniform spacing, is used then this field must be completed.

v. Secondary size – this field is the minimum dimension which will take into account the type of the spacing selected.

Sxx stresses on linear element at extremity “i”

vi. Extend into the wall – when a beam is supported by a wall (in the longitudinal direction), activating this option will create a rigid connection between the wall and the beam.

The extended mesh capabilities of Advance Design allow you to apply and refine the meshing of each design element, and results in a quality analysis of your design.