GRAITEC, an international BIM, Fabrication and Design software developer for AEC, and Autodesk® Platinum Partner across Europe, is delighted to announce winning the  prestigious Autodesk Platinum Award for the third consecutive year, for the “Largest Net New Subscription Growth in Europe, Middle East and Africa (EMEA)”

Winning an Autodesk Platinum award is a spectacular achievement in a very challenging and hotly contested market place. But managing to achieve this accolade three consecutive years in a row is testament to a business that is clearly focussed on growth through its customer centric approach, not only helping clients achieve their own successes, but also assisting them to maximise the return on their Autodesk software investments.

Says Steve Houlder, Graitec COO: “We were delighted to achieve a Platinum Award for the second-time last year. Being able to achieve our goal for a third consecutive year however is huge honour, and one that not only reinforces the chosen path for our strategic growth initiative, but also demonstrates the strength and depth of experience of all the Graitec teams across EMEA who’s commitment, professionalism and focus have helped make this achievement possible once more.”

Says Manuel Liedot, Graitec CEO: “The achievement of this award clearly illustrates our determination and commitment to the goal of becoming a leading global BIM provider and principal Autodesk Partner, as we continue to invest in strengthening our teams, our technology and service delivery. I would like to congratulate all the Graitec teams involved for their hard work and dedication, as well as thanking all our loyal and new customers around the globe for their continued support.”

Founded in 1986, GRAITEC is an international Autodesk Platinum Partner across Europe including an Autodesk Developer Partner and Autodesk AEC Solution Associate, delivering high-performance BIM solutions, bespoke add-ons and apps for Autodesk key AEC platforms. Operating throughout 38 offices across 11 countries worldwide, GRAITEC offers its clients an extensive range of established software solutions combined with the full portfolio of Autodesk products and BIM suites which help address the most demanding projects needs and maximize productivity, efficiency and performance. With 450 employees amongst which there are 200 BIM consultants, GRAITEC is an innovation focused company whose products are used by more than 50,000 construction professionals worldwide.

GRAITEC, an international BIM and CAD software developer for AEC, and Autodesk® Platinum Partner in US and across Europe, is delighted to announce winning the highly coveted Top Reseller in Net Subscription Growth Platinum Award for the second consecutive year.

The Autodesk Platinum club awards are hotly contested by the top echelons of Autodesk Resellers around the globe and winning resellers not only need to have a proven and successful business strategy but more importantly need to be aligned to their customers’ needs and requirements.

Says Steve Houlder, Graitec COO “Winning the Platinum award for the second consecutive year is a fantastic achievement and one that is testament to our committed teams across the U.K, France, Germany, Italy, Poland, Slovakia and the Czech Republic. Our teams are all dedicated to delivering outstanding customer success, support and sales performance in an often challenging environment, so this award is dedicated to our staff and also our customers across the regions.

We are delighted to again be recognised as a leading Autodesk global partner and will continue to invest across the group in our teams, structure and strategy to further support our clients successfully adoption and deployment of Autodesk technologies to fuel their own business growth.”

Manuel Liedot, GRAITEC CEO adds: “GRAITEC’s aims of becoming a global leading BIM provider are being realised and winning this award demonstrates our commitment and goal of delivering real benefits to customers whilst accelerating BIM adoption around the world.

The Graitec EMEA success is a result of the teams hard work and dedication under the guidance of a highly experienced management team, and I would like to congratulate all members of the team on this excellent achievement“.

If you are in the Infrastructure, Building or Construction industry and you use Autodesk software for innovative BIM workflows then enter your projects/s into the AEC Excellence Awards 2016 and be in with a chance of winning some sensational prizes such as a trip to Autodesk University 2016.

This competition has been running since 2012, recognizing, showcasing and rewarding a number of pioneering BIM for Infrastructure projects and this year they have expanded the categories and will also be including Building and Construction as well. Furthermore, if you have done a small or niche project then there is also a number of sub categories too i.e. computational design, fabrication etc.

With a massive 19 categories in total you are allowed to submit up to 5 projects and what’s even better is that you will receive public recognition just by submitting your projects as entries get showcased in a book which gets shared and publicised across the globe.

To find out more about the Autodesk AEC Excellence awards including the rules, prizes, judges and how to enter, just CLICK HERE!

GRAITEC are delighted to announce that we have been nominated for Channel Partner of the Year at the Construction Computing Awards.

The Construction Computer Awards has been running for ten years now and they ‘showcase and reward the technology, tools and solutions for the effective design, construction, maintenance and modification of commercial buildings, residential and social housing and civil engineering projects of all sizes.’

As well as the Channel Partner of the Year award there are a number of different categories in the competition such as BIM project 2015, product of the year 2015, hardware product 2015, Mobile Technology 2015 and much more. The awards ceremony taking place at the Hotel Russell, London on the 19th November is bound to be an event to remember.

Please help us win by voting GRAITEC as Channel Partner of the Year. Voting Closes on the 6th November 2015.

Thank you for voting GRAITEC!

This year, we are delighted to announce that  GRAITEC has made the finals of the Construction Computing Awards in the following categories:

–> Construction Computing “One to Watch” Company 2012 (companies that are going to make a real impact in the industry) – GRAITEC UK;

–> Structural Design Product of the Year (accurate design of overall products and individual joints, whether working in steel, concrete or other materials) – GRAITEC UK – SuperSTRESS;

–> Product of the Year (the product which has impressed you most throughout 2012) – GRAITEC UK – ADVANCE Steel;.

–> Company of the Year (the company which has impressed you most throughout 2012) – GRAITEC UK.

Featuring more than 20 different categories, the Construction Computing Awards reward the technology, tools and solutions for design, construction, maintenance and modification of commercial buildings, residential and social housing and civil engineering projects of all types and sizes.

Voting started on September 13th, 2012, and will close on November 8th, 2012. You may cast your votes by registering your personal detailsand selecting your favorites here.

The Winners Ceremony will take place at Hotel Russell in London, on November 22nd, 2012.

Stay tuned for more information and don’t forget to show your support for our company and products.

This year, Cluj Arena Stadium was nominated for the WAN Awards 2012, in the Civic Buildings category, by the International Awards for Architecture.

With a budget of over 35 mil Euros, Cluj Arena Stadium in Cluj-Napoca, Romania, managed to meet the highest norms in performance and functionality, totaling latest UEFA and FIFA standards.

The stadium built in the central part of the city, was designed to be multipurpose, accommodating numerous social events including football and sports competitions.

Dico şi Ţigănaş Design Office was in charge of modeling and detailing this complex project, which was finished in the autumn of 2011.

“It is more than a stadium; it is the new landmark of the city, in which we managed to capture the passion, the emotions and most of all, the spirit of fair-play”, Eng. Florin Dico from Dico şi Ţigănaş Designe Office. 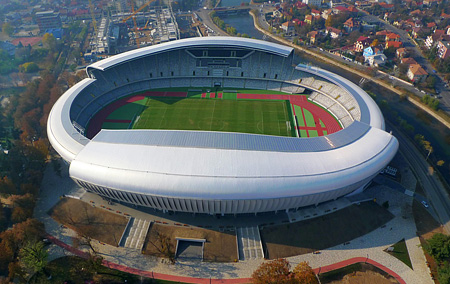 For more details, you can visit the official web-site of Cluj Arena Stadium: http://www.clujarena.ro/ 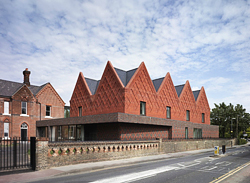 Brentwood School’s new Sixth Form Centre has won the 2012 RIBA Award from the Royal Institute of British Architects. The new Sixth Form Centre, designed by architects Cottrell and Vermeulen, took almost two and a-half years to build and was completed in August 2011. Although, it has been used by students since the beginning of the new academic year in September, the Sixth Form Centre was officially opened in November 2011 by His Royal Highness, Prince Edward. 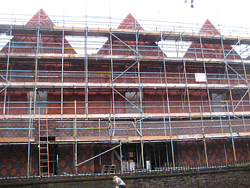 The project consists of the three buildings which make up the centre – the remodeled Victorian vicarage, the classroom block, made of a steel/concrete hybrid design, with a very complicated roof and the Wessex Auditorium, an assembly hall with a complex box section truss design.

Facilities include common rooms and private study areas; 16 additional classrooms equipped with up-to-date teaching aids, interactive whiteboards and the internet; a dedicated computer suite and the multi-purpose auditorium, with 400 seats. The rooms are heated by a ground source heat pump which draws water from 15 vertical pipe loops penetrating 100 meters below the ground. A sophisticated building management system allows the temperature in the building to be controlled remotely and windows opened or closed automatically.

Adrian Betts, from the TSI Structures LTD design office, explains why Advance Steel was the best solution for the completion of this project: “The ability to import AutoCAD drawings and convert these lines into Advance Steel objects was essential. Without this command many extra office hours would have been spent modeling the new concrete steel structure and the existing building.”